For the time being I'm not sure where I will be living in the fall, so work on the physical layout has stopped for now. I have had some time to think over the layout, however, and assuming that wherever I end up building the Taihoku 1937 layout I have a similar amount of space, I've revised the plan to the following: 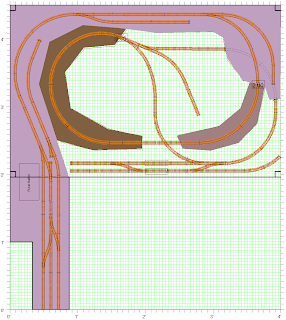 It now incorporates a great number of sidings, as well as a reverse loop that makes use of the wooden bridge. I'm not sure if there will still be a river running through the middle; it depends on how it looks when I mock it up.

Also in the meantime, I've returned to Blender to try modelling more structures and scenery from the era. I plan on updating the older models, and attempting to create the main, pre-1937 station in Taihoku.
Posted by Sudasana at 11:17 AM No comments: