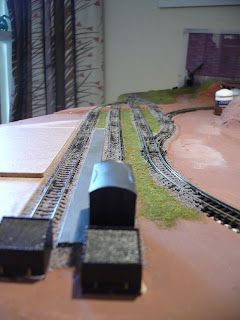 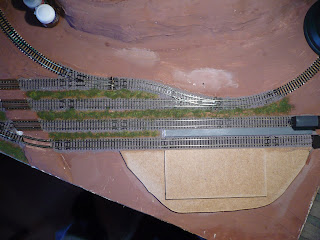 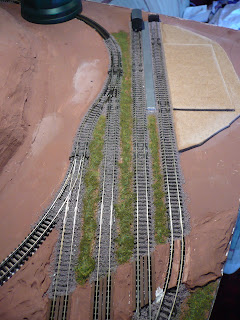 Also added a thin concrete platform between the two station tracks, for moving luggage and other local freight between tracks.

I'm slowly adding ballast to the track in the front part of the layout. I also raised up the station area with a layer of MDF so that the station platform will be closer to the level of the railhead. I plan on adding a thin layer of plaster in front to smooth out the slope, adding in a dirt driveway area as well. 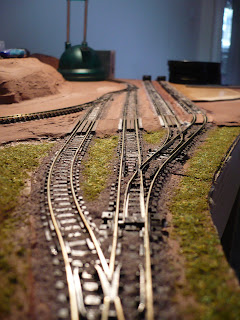 A ground-level shot, looking 'east' toward the yard area. You can really see how poorly I laid out the straight sections of track! 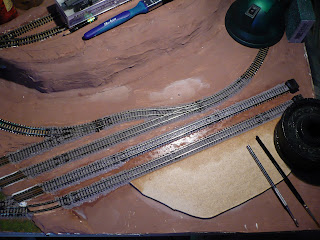 Overhead shot of the station and yard area. The glue is still very fresh on the bottom section. Decided to plan on adding a very thin platform between the two siding tracks, rather than just ballasting it over, so no ballast there for now.
Posted by Sudasana at 11:44 AM No comments:

Yesterday I installed the BullFrog remote turnout control. There is one turnout on the layout that is not easy to reach from the front; you have to stand and reach over a hill to switch it, and it links the upper part of the layout with the base level. Installing a turnout control is not an easy thing to do once the turnout and track has been ballasted! I also had to shift one of the beams supporting the MDF baseboard about two inches to one side to even reach the area under the turnout. Needless to say this was not a planned addition, but it's worked out really well so far.

The BullFrog kit comes as a wooden sprue of laser-cut parts, each of which feels quite strong. The pieces come apart very easily and didn't even have to be trimmed to fit together. Assembly is done with wood glue or PVA and was finished very quickly. Although the kit can be assembled so that the switch box ends up to the right or left of the switch wire, depending on where one has space under the layout, the instructions regarding this were a little confusing and I had to check the plans several times to make sure I was putting mine together the way I wanted. 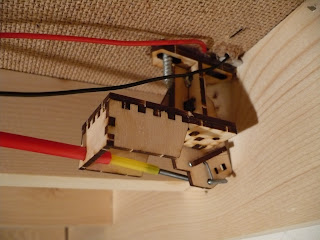 The red and black wires are feeder wires that happened to be attached to the base of the turnout, not involved in the BullFrog. I accidentally pulled one of them out, and will have to solder it back on to the side of the rail in the future. The bottom of the rail, where they normally attach, is completely inaccessible now.

Fitting the assembly to the bottom of the layout, and matching up the switch wire with the turnout level proved difficult, but eventually I had everything lined up, slathered the joint with glue, and stuck in a wood screw from the top to bind it together. In hindsight, it is very difficult to glue anything to the rough side of MDF, and wood screws have to penetrate through the board to have any hold. I think a thin piece of wood added ahead of time would have made things a lot easier, and given me a flat base to attach the assembly to.

I had to order an extension control cord so that the control knob can reach the front side of the layout. Fast Tracks, the company that produces the BullFrog, was great to order from. Right now the switch action is smooth and reliable. I did add candle wax to some surfaces as suggested in the instructions. Hopefully when the extension arrives in a couple weeks, I can finish everything and have it operational. 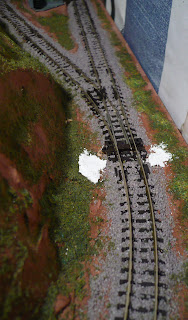 This is what the topside of the turnout looks like now. The right patch was for a hole I didn't end up using, and the left conceals the top of the wood screw; both of these will be covered up with groundcover. You can just barely see the tip of the wire poking through the left arm of the switch lever.
Posted by Sudasana at 6:07 PM No comments:

Just a short post to say that I received a BullFrog Manual Turnout Control kit and am assembling and installing it on the turnout that links the ramp to the main loop. So far, so good, although I had to move one of the structural beams in the table framing to get at the underside of the turnout!
Posted by Sudasana at 4:50 PM No comments: