The Hills are Alive with the Sound of Plaster Cloth 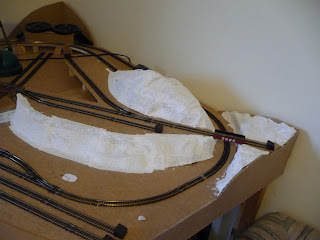 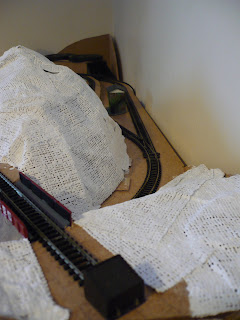 Started plastering the hills; plaster cloth is an amazing material and perfectly suited to this task. I finished these two small hills in much less time than I had thought it would take. Building the frame took much longer. Still building the frame around the tunnel in the far corner.
Posted by Sudasana at 10:34 AM No comments:

Continuing work on the landscape and on the rural station building. 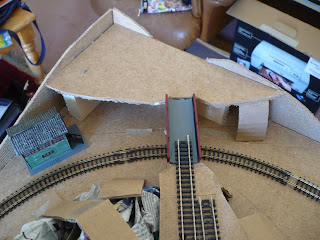 I added a hardboard face to the entire right edge of the layout, since that one is very visible from the room. In the corner is rises up to support the hill that will eventually go here. In hindsight I did not leave enough room for the signal box you can see here; the 'hills' behind it are essentially going to be cliff faces. 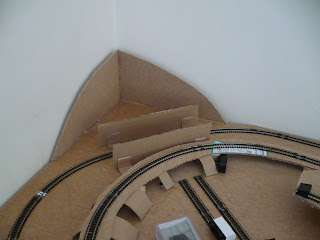 Built up a facing for the hill in the back left corner, where the tunnel will go. The top of this will lift off for access to the tunnel. I'm planning a sort of rolling hill ridge between this hill and the edge of the upper level siding you can see at the extreme right of this picture. My plaster cloth should arrive in about a week so I need to finish framing out the supports. 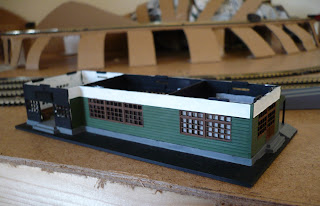 Finally, I'm slowly getting the base coat for Kabayama Station 樺山駅 done. Not quite sure what to do with the walls in the waiting area. There is no detail, and there's actually some large injection-mold studs around the windows that do not look realistic at all.
Posted by Sudasana at 3:06 PM No comments:

Weekend Update: There's Hills in them there Hills!

I have not had much time to work on the layout recently, but I have done a few things here and there: 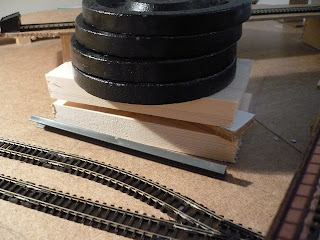 Making a freight platform from layered pieces of hardboard. The plastic piece in front is a Peco (I think) platform front, useful for the fine brickwork detail. The plan is to build up the bulk of the platform and then plaster the top, painting it to look like concrete. 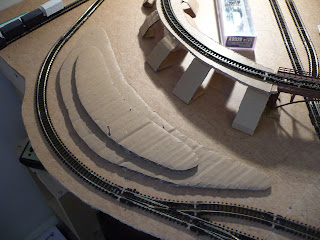 Small rolling hill built up from two layers of cardboard. I'll lay the plaster cloth on top and add a few shrubs and maybe a couple trees. The main road will be sandwiched between this hill and the slope of the ramp. 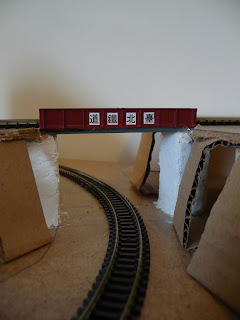 Decorated the bridge! Printed these out on regular paper and glued on with PVA glue. I hope when the bridge is weathered they will look more like painted signboards and less like what they are.

Today I continued work on building up the landscape. 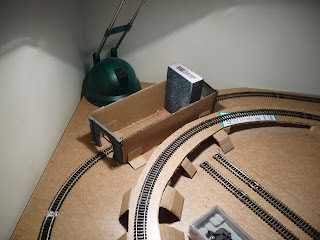 The tunnel portals are not painted yet, but I've put them in place using blu-tack temporarily to build up the tunnel. The plan is to have the top of the hill lift off for access, which I think is better than building a hole into the back of the hill since this is in the corner of the room. Sanding block is to keep the sides square while they dry. Unfortunately there will be a very steep hill between the ramp track and the top of the tunnel, but it's a good place to put a short cliff face or similar. 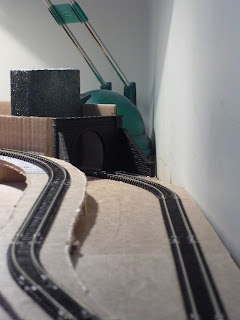 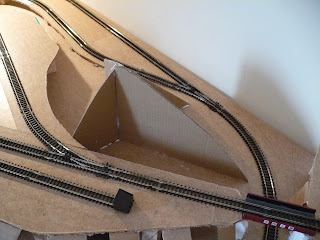 Trying a new technique for the large hill in the upper right of the layout. Started with a single piece of cardboard that I stuck in the middle, then eyeballed it so that an operator standing in front of the layout (assuming they're 6' tall) would just be able to see trains passing behind the hill, but would easily be able to lean over and see everything. Then I measured and cut out the cardboard shapes based on this height. 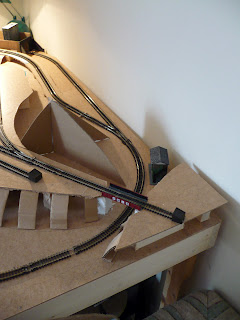 Another view of the hill framework. 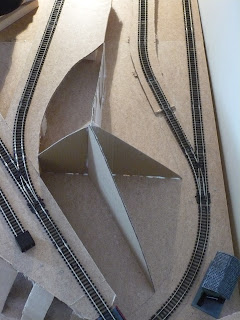 Yet another view. I don't know whether I'll use cardboard strips, newspaper, or a combination of both to build up the hills in preparation for plastering.

Next is to continue with the tunnel hill, and finish off that platform. I've started figuring out what each of the five sidings will accept/produce, looking forward to starting a random waybill system for ordering different cars around the layout. Also named the small passenger station and putative town beyond: Kabayama 樺山, after a neighbourhood in the real Taihoku where a major freight yard was built ca. 1938.
Posted by Sudasana at 2:54 PM No comments: