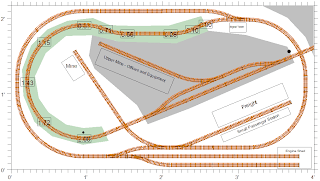 Ok, one good thing about doing things in sections is that you can test running on the build portion while redesigning the part that's not yet built. After running my D51 around the base level, I realized that having a runaround track would be extremely useful if I am going to go with my plan of having this be an end-of-the-line mining town. I changed the upper level a little to provide a two-ended siding, and the industry track now runs off of that rather than the mainline heading down to the lower level. Now I can head up there to drop off full cars of ore, or to pick up freight that has been left on the siding, and I'll have more flexibility in terms of making up short trains.

If I were designing this again from scratch, I would definitely include a runaround in the small yard. But the track is down, and I'm going to stick with this for now. I am considering adding a small stream on the lower level, with culverts where it intersects the track rather than bridges, but I can't figure out a route that doesn't criss-cross the layout in too artificial a fashion.

Also - the two bridges have been shipped!
Posted by Sudasana at 12:26 PM