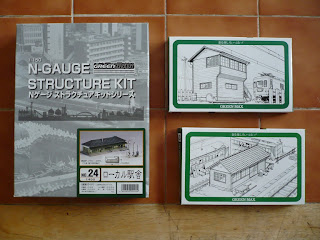 Received three new structures in the mail from Japan: a rural station, signal/switching tower, and a station master's building, all by Greenmax. The detail of the parts looks great, although I'm not sure if I will end up using the bases for the smaller two structures. I am very skeptical about using the included fences - they end up being some like 1x1m in N scale, far too bulky to look realistic. I should be able to start assembling them on the weekend.

Picked up some more wire and some terminal blocks, hopefully I can improve the wiring situation underneath the layout. I also bought some quick disconnect terminals for connecting the power pack to the layout, but they don't feel as quick to disconnect as advertised, plus I have no idea how the wires are supposed to be attached to the terminals; they are also labeled as "solder-free".

Got to visit the Hockley Valley Railroad recently, which has a great couple of HO-scale layouts and an amazing indoor G-scale layout set partly in the modern era and partly in the transition era. I would encourage anyone in the area (Alliston; in Southern Ontario, north of Toronto) to check it out, the owner is extremely friendly and helpful. They have a great selection of Canadian locomotives, although they seem to specialize in HO and G scale rather than N.
Posted by Sudasana at 12:41 PM