Since I'm restarting work on the layout, it's probably a good time to record the current status of different areas, and my plans for their future. 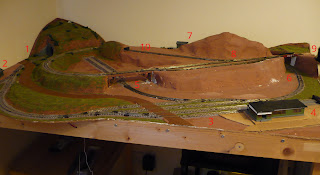 You can see the blur of a cat at the extreme right! Details on each numbered area follow. 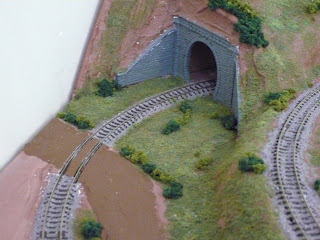 Still a lot of work to do weathering the portal and filling in the greenery, but this area is looking much more "finished" than any other on the layout. I might later add a fence near the bushes between the open space and the road. The crossing will get some rural signage and the whole road still needs a lot of work adding to the surface. 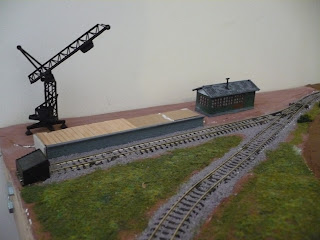 This was originally supposed to be the entrance to a yard, but when I gave up on the small extension idea, it turned into this. The crane fits in well here, and I'm pleased with out the ballasting next to the platform worked out. The platform itself is unfinished because I ran out of that size of balsa wood! The freight office needs some detail around the base, but it has a light installed. 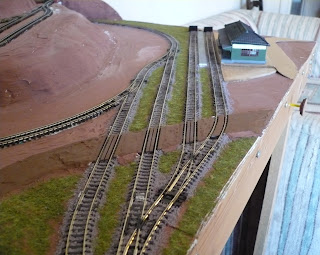 These crossings turned out much better than I had anticipated. Still needs more foliage around the tracks, and a lot more detail in the yard area: signals, lights, signs. The unpainted area in the back is a bit of a puzzle to me. Not yet sure what should go there. 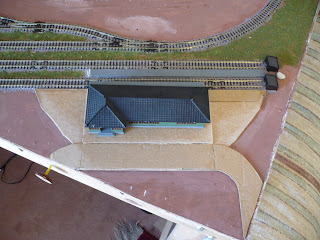 One of the focus areas of the layout, and one of the last to be landscaped. I've roughed in the driveway road and small engine platform to the right. At the bottom will be the suggestion of a small park, with trimmed greenery and perhaps a low stone wall. The station itself is nearly painted, but still needs a lot of detail work. There will be three lights in the building, one for each of the interior room sections.

5) Bridge and Future Site of Kabayama Mine 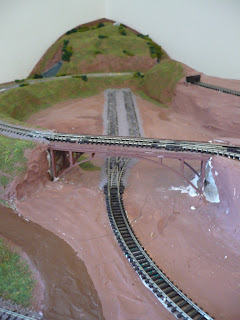 I've removed the mine structure temporarily to give me some work area on the layout surface. I think this will be one of the last areas I work on, but it will be interesting to see how it comes together, especially working with resin for the small pond. As penciled in, the road will branch and cross the track before heading to a parking lot for the mine. 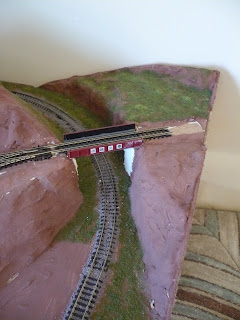 Just recently re-laid this track after adding the new turnout. Lots of work to do in this corner. 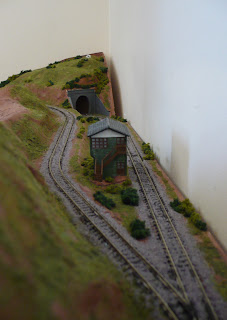 One of the best views of the layout so far, in my opinion. The building is finished, with lots of greenery detail around the base, and a light installed. The portal still needs weathering, and there's a need for some signals to control the approach to the turnout. 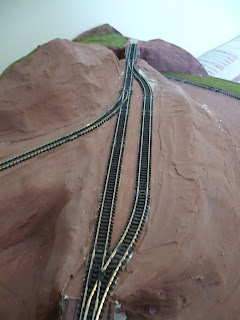 Something I should have planned on from the start, since getting any number of cars into the siding at the left is too difficult without it. Lots of room here for small details around the tracks. 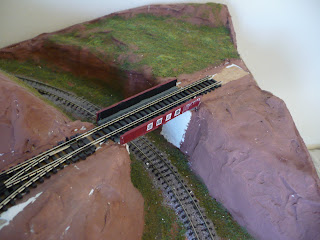 Another view of the girder bridge, the track will be extended over a small cantilevered extension to allow the engine and 1-2 cars to clear the turnout. In fantasy land, it's the connection of this small local network to the larger railway. 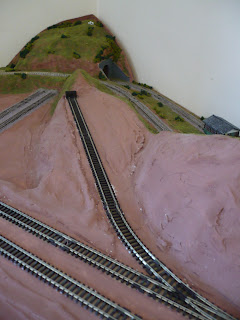 Intended as a place to leave cars to be picked up by inter-local trains coming in from outside the layout. Might end up leveling the area next to the siding and adding a platform and some buildings, but I don't want to block off the back area too much.