Soldering Rails for Fun and Profit

I ran into a problem on the upper level after I added the new turnout. I used a few short pieces of settrack that I had left over, but the track connectors had become so bent that they snapped off, and I couldn't extracted the broken half. The result was that two of the rail connections were just touching without any support, and I found that if I ran the locomotive over them, it quickly lost power after passing over the unconnected joints. 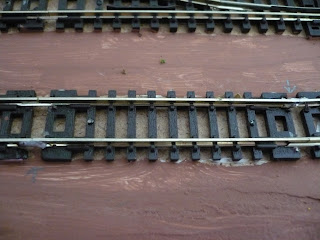 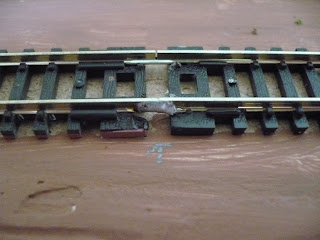 So I decided to experiment with rail soldering. For my first time, I think I did alright. It had been years since I last used a soldering gun. I put some damp sponges beside the joint to help soak up some of the heat from the rails, but I did end up melting some of the plastic ties. Luckily it wasn't catastrophic. It doesn't look great from close up, but the joints should be much less visible once the rail is ballasted, and most importantly, now the loco runs great over it. I still need to add the pocket track extension, which will need another feeder line, but for now I've tried out a new skill and fixed another problem. 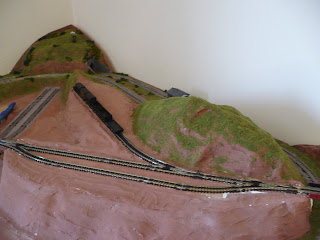 In other news, I'm slowly adding green to the hills. I've also put a black base coat on the rolling stock.
Posted by Sudasana at 11:45 AM