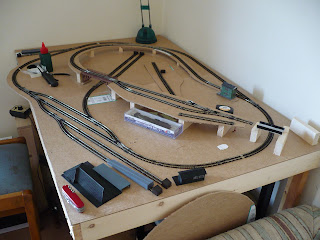 Progress continues! Yesterday I added the wooden bridge and tacked down much of the track on the upper level. The track on the wooden bridge proved to be a bit of a problem since it was bowing up and there wasn't enough structure to pin it down. So I grabbed a 1" square piece of hardboard, held it underneath the bridge deck, and pinned the track into that. So far it's held really well, and you can't see that piece at all unless you were somehow standing underneath the 2" high bridge.

I wired in a feeder on the upper level so that it would have sufficient juice, and to give power to the siding which I'm leaving unbuilt for now while I think about that area of the layout. I then started looking at the bridge on the right side of the layout, where the connection to the imagined rest of the world leads off to the edge of the baseboard, and discovered that my bridge as assembled would not give nearly enough clearance to trains below. So I got out my clippers and took off the sides, gluing them on to a spare piece of roadbed that came with the kit. Once it's painted up I think it will look good enough, although I had to lose the detail of the bracing under the bridge. Well you couldn't see that anyway. 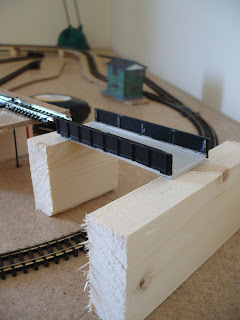 Also wired up all three feeders under the layout and connected it to the control box. Ran a train around and no problems so far! I also added a new siding on the left edge of the layout and started to put together some of the Japanese railroad buildings I've had primed but sitting around for some time now.
Posted by Sudasana at 11:48 AM