Continued working on some of the buildings, assembling them and giving them a basecoat of colour. 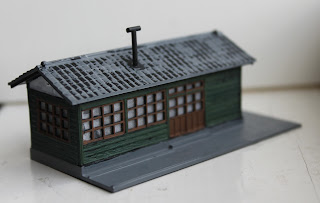 This small station building (the Greenmax Trainman Office) went together pretty easily. At this point I was still using a sharp knife to cut a hole in the base (which is quite thick compared to the walls) for eventual illumination. Took me a very long time and was far too dangerous. 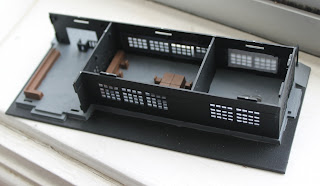 With the main station (the Greenmax Rural Station House) I realized I could just try my drill for the floor hole, and it went through with no problem. The interior of this station is divided into three areas, from left to right: waiting area for passengers, office and ticketing desk, and finally some kind of workroom or station manager's office, which is separated by a solid wall. I decided to drill a hole in the floor of this room, since it didn't have any interior details anyway, and put paper on the windows. My plan it to have the wires come up through the baseboard into this room and power three lights, one for each section, the wires for which run along the underside of the roof. It would be possible to have each light on a separate switch, although if I don't build blocks for the roof space the light would spill through.

Overall the station is a great little structure, with lots of detail. 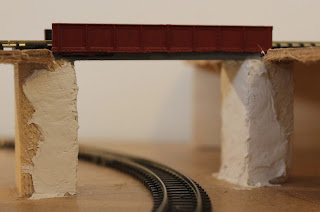 Finally finished the bridge to nowhere, gluing it to the supports with PVA glue and  pinning the track in place. I added a little filling compound to the supports so that eventually I can sand it flat, paint it grey, and weather it to look like concrete. Lots of clearance under the bridge as constructed. 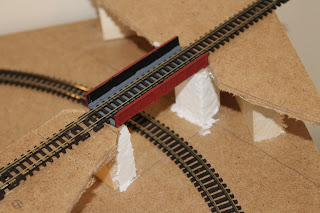 So this area is finished, and the only section of the layout trackwork that still needs to be built is the siding on the upper level. There's a problem, however, in that the siding is much longer than the track available for a loco that is pulling out of it. I guess this will just mean some extra complexity to pulling cars out of the siding and getting them onto the mainline, which in a small layout is not a bad thing.
Posted by Sudasana at 10:01 AM