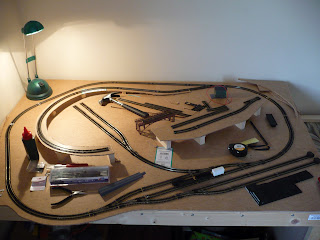 After laying down most of the ground-level track, I realized that the yard area did not resemble a prototypical mainline, in that trains passing through were forced to go through a tight curve and had to pass by a spur. So I pulled up a lot of track, rearranged it, and put together a new layout. I had to custom cut one length of track, something I've never done before and which took a lot of tool work to get right. Everything is tacked again and it runs well enough. Trains can now run the main line loop without any tight corners, there is a storage siding and/or alternate route, and the yard is still there. I lost the extra feeder line but since I will have one at the junction to the ramp, it wasn't really needed.

Also put together the ramp leading up to the upper level, and the first platform of that level. I traced the ramp track plan on to a new sheet of hardboard and cut it with a hand jigsaw. Blocks of wood are supporting it at intervals, which I cut to size then sanded down and glued into place, checking the height of the board against what my XTrkCAD plan said it ought to be. So far, so good. Now to pick up three right-hand turnouts to finish the upper level track and add a new siding on the far left.