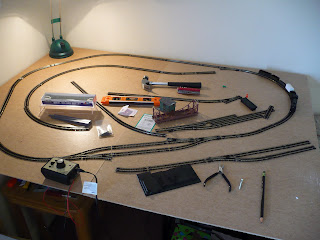 Started pinning down the track. First I wired up the feeder locations; one at the lower left to feed the yard and mainline, one on the right to help the mainline and feed the siding that extends into the middle, and an extra one on the turnout that will lead to the ramp. That last one is not really required but I wanted to make sure that trains heading up the grade will have enough juice to make it. I bought a small bag of pins for £1.50 but the hobby store clerk recommended that I use a soft board to pin them in to. I looked online but could not find a good nearby supplier of what they recommend: Sundela, which looks like a great product but not one I could get a hold of.

So I went ahead and tried hammering the pins, and by holding the shaft with a pair of very small pliers I was usually able to hammer them in to the hardboard. They do protrude out the underside of the baseboard but I will bend back the points once I'm sure I'm not going to pull them up to fix them. I went and did the main loop, and managed to get all the pieces more or less in line with one another. There are a few small gaps near the back but nothing that should cause trouble. The far curve ends up perilously close to the edge of the board; if I didn't have to leave a gap there because of the molding on the wall I think trains would be hitting it.

I hooked up the main feeder only and ran the train around a few times. No problems except that while stopped on the far straightaway the couplers seem to have come detached. There might be a bit of a grade there, although I propped up the table legs and checked the surface with a level. Otherwise I think I am good to go to pin down the yard and the central siding. After that is done, next is putting together the ramp and the upper level. 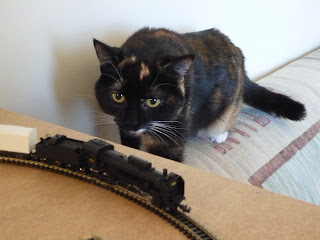 Our younger cat, Ness, is really interested in yet terrified by the train. This is the first time she's seen it move. She attacked one of the cars while the train was stopped, and I think the baseboard acted like a drumhead, because it flew into the air and ended up behind a couch. I think I'll have to keep my eye on this one during future running sessions.
Posted by Sudasana at 4:04 PM